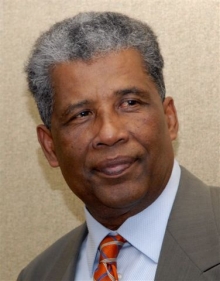 A Message From The COO & Co-Founder

We never know where life is going to take us. I certainly didn't imagine that I would be intimately involved in the development of one of the most successful Minority-Owned and Operated Construction companies in New York City and realize the American Dream.

Growing up in the Caribbean, as one of 10 children, the most important thing was survival. Food, Clothing and Shelter were the things you worked for. At an early age I realized that it was entirely up to me to make it in the world. So when my father asked me what I wanted to be when I grew up I bravely and energetically said "shovel work". My father was extremely disappointed that my ambition was so limited and of course he did not express it in such kind words.

As a farmer and a logger he wanted his eldest son to be a little more ambitious. Unfortunately, he did not get the opportunity to see what my shovel work would eventually allow me to achieve.

Nonetheless "shovel work" is what I pursed, then learning how to operate cranes and derricks in Puerto Rico before going to Indiana to train on larger rigs. When I arrived in the United States, I settled with my family in Brooklyn. At that time employment was scarce especially in my field of construction. You would get work for a day or week or two but nothing steady. So I worked as a window cleaner, a truck driver, a mechanic, a welder, and an operating engineer.

Despite my skills and ambition, I quickly learned that my potential was limited because I couldn't find steady work in my field. In order to survive, I did the only thing I could think of at the time: make my own way. With the little money my family and I had saved up, we purchased a 27 year old dump truck, and started as an owner operator entrepreneur.

The first time I got a check in the mail for $1200 it was like Christmas to me and my family.
I learned how to demolish buildings and recycle, selling bricks, lumber and scrap iron to make a buck. Without knowing it, A. Williams Trucking was a "green" company long before recycling was the politically and environmentally correct thing to do. We made the green we needed by being "green".

After 30 years, that $1200 still motivates me. It has been very challenging in an unlevel playing field to be successful, but we did not give up or give in no matter what. We came prepared to do an honest days work and that's what we have done for decades and will continue to do so.

A. Williams Construction started out as a means of survival. It has grown and blossomed into a well respected firm. Its goal is to move forward, contribute to the construction industry and the building of New York City without forgetting its humble beginnings. My sincerest gratitude to all, and most importantly, my employees, who have always believed that no job was too difficult to get done.

* From Digging the Dirt to Cutting The Ribbon.